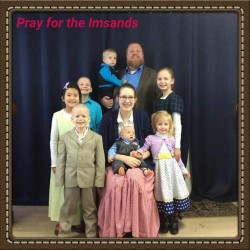 Pastor Ernie Imsand was born in Mobile, Alabama in 1979. Growing up, Ernie did not have much Christian influence in his life. Around the age of 12, he began searching to fill the void that every man has in his soul. This led him to abuse alcohol. Of course this brought much heartache into his life. At the young age of 17, he joined the US Army to become a “man”. He had hoped that a life in the military traveling abroad would fill the void in his soul. He continued to live a wretched life through his military years. His last year of military service was in South Korea near the DMZ. He then returned to Mobile, Alabama only to find that his “friends” had ventured from alcohol to illegal drugs. Ernie foolishly thought that by making money he could fill the void in his soul. He fell into the life of drug dealing and use. Praise God who is still in the business of saving sinners. Ernie found himself in the Texas jail cell wearing a nice orange prison jumpsuit. Two weeks later, the greatest day of Pastor Ernie’s life would take place. After hearing an announcement in the Texas jail for a church service that evening, he went to attend service in that jail. The only type of church service he had attended in his life were ritualistic where you sit kneel stand, etc. For the first time in his life, Ernie realized he was a wretched man who had lived an ungodly life and sinned against a Holy and righteous God. Missionary to the Prison, Robert Bottom preached Heaven sweet and Hell hot that day. On December 23, 2000, the void that Ernie was trying to fill his entire life was filled by the only One that can fill it, the Lord Jesus Christ, himself. Bro. Ernie immediately enrolled in the Prisoner’s Bible Institute offered by the Rock of Ages Prison ministry. Bro. Ernie would spend 10 to 12 hours per day in the precious Word of God washing and renewing his mind. After being paroled a year later and returning to Mobile, Alabama, he quickly found Victory Baptist Church where he would be trained by seasoned Pastor Robert Reed in Victory Baptist Bible Institute. Pastor Reed mentored Ernie personally pouring many hours into his life. Ernie graduated from the Victory Baptist Bible Institute and was ordained in 2005. He arrived in South Korea as a missionary in 2006. From 2006 to 2007, Ernie was the associate Pastor at Lighthouse Baptist Church in Paju, South Korea. In 2007, Bro. Ernie returned to the US to marry his precious wife, Lydia McClendon. God even used the Korean people to introduce Ernie and Lydia to each other. Since 2007, God has blessed the Imsand family with 7 children, 6 by birth and 1 by adoption. After marriage, the Imsands based in China on the North Korean border from 2008 to 2012. This area has many North Korean refugees and hurting people. They would assist the persecuted brothers and sisters in Christ and the underground church until 2012. In 2012, their family would migrate to Vietnam to pursue freedom for their North Korean adult church member and their adopted daughter who is also from North Korea. Little did they know at the time, they would be in Vietnam for 2 years learning to bloom where they were planted. They quickly discovered a pocket of 50,000 South Koreans living in Hanoi, Vietnam and began to declare the glorious gospel of Christ among them. In 2014, by God’s grace, the Imsand family arrived back in South Korea and Bro. Ernie became the Missions Pastor at Seoul First Baptist Church. A year later, Bro. Ernie would become senior pastor at Grace Baptist Church. From 2015 to 2018, Bro. Ernie would labor among the Korean people and the US military stationed in South Korea. In 2018, as the military downsized and moved troops to different areas of Korea, God led Grace Baptist Church to merge with Yongsan Baptist Church. Bro. Ernie’s current focus is the distribution of gospel materials and the weekly prison ministry. Many hurting men in the Korean prison are waiting to hear the Gospel.

Preach the word; be instant in season, out of season; reprove, rebuke, exhort with all longsuffering and doctrine 2 Timothy 4:2