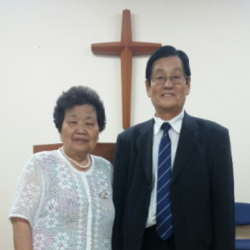 Pastor Lee Jong Il comes to us from Pastor Lee was a lieutenant of Korea Army. He served during the Vietnam War in 1969 and participated in 26 different missions.  In 1970, He accepted Christ as his personal Savior.  During this time, he met Missionary Larry Ellis.  Brother Ellis, who was sent out by Clarksville Bible Baptist Church, was instrumental in his life. He was called into the ministry and was ordained on June 27th, 1976.  He has attended Korea Baptist University (한국침례신학대학) where he graduated with a Th.B.  He has also attended the following schools:

Pastor Lee Jong Il served as a professor at Korea Independent Baptist College for 7 years.  He has also served as Pastor at two churches:  Marysville Baptist Church in the United States and First Baptist Church in Sung Nam City, Korea.  While in the United States, he served the Campus Ministry at the University of California, Berkeley Campus for three years.  He is currently focused on evangelism and ministering to soldiers, both Korean and American, especially at K16 Army Base.