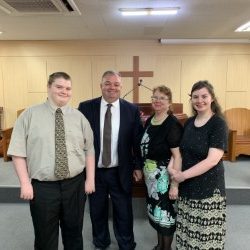 Pastor Robert Oetman was born in 1965 and raised on a farm near Holland, Michigan in the United States. He came to know Christ as his Saviour at age 7. When he was 16 God called Robert to serve as a foreign missionary. Robert began training at the Fairhaven Baptist College in Chesterton, Indiana. He graduated in 1989. While at Fairhaven, Robert met and Brenda Rud. They were married in 1987. Brenda graduated with a degree in elementary education in 1990. For the six years Robert served as an assistant pastor while helping with a new church plant in Madison, Wisconsin. The Oetman’s arrived in Seoul, South Korea as church planting missionaries on January 6, 1999. For 13 years they served at the Seoul First Baptist Church. Pastor Oetman has been leading the Yongsan Baptist Church since March 2013. The Oetman’s are sent out as missionaries from the Faith Baptist Church in Avon, Indiana. Pastor Oetman has earned graduate degrees from the International Baptist College in Tempe, Arizona and the Pensacola Christian College and Seminary in Pensacola, Florida.